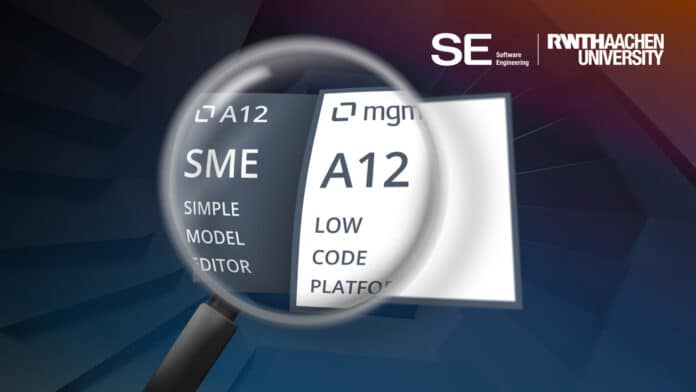 How can cyclic dependencies be visualized in validation rules? And how can automated layout capabilities help domain experts in modeling complex interdependencies? In cooperation with mgm, the Chair of Software Engineering at RWTH Aachen University is now supervising a new master’s thesis and a bachelor’s thesis dedicated to these questions in the context of A12’s graphical modeling tools.

Especially in extensive forms of complex business applications, it is important to check the validity of the data entered by users. The model-based low code platform A12 provides a specialized domain-specific language that allows modeling of validation rules. This language can be used to define simple specifications for input fields – for example, that several fields must be filled in – as well as to capture very complex business contexts. In practice, the document models on which the forms are based and the rules applied to them can become very extensive. It can happen that contradictions sneak in which span over many rules and can hardly be found manually.

For this reason, mgm has developed a system for the detection of such contradictions or cyclic dependencies, which automatically detects these problem cases. Exactly at the results of this contradiction detection the master thesis now starts with the questions:

The bachelor thesis is also situated in the context of A12’s graphical modeling tools. Here, the focus is on automating certain layout functions to support users in their modeling work. For example, a (partially) automated arrangement of diagram elements is aimed.

The technical basis for both final projects is the A12 diagram editor, which emerged from the research collaboration last year and is being continuously developed. The capabilities developed in the course of the work are to be integrated into future versions of A12’s modeling tools. This will make them available to practical work around the development of web-based business applications based on the model-driven approach.

For example, integration with the Simple Model Editor (SME) is intended. The SME is A12’s web-based modeling tool, which is primarily developed at mgm’s Aachen site.