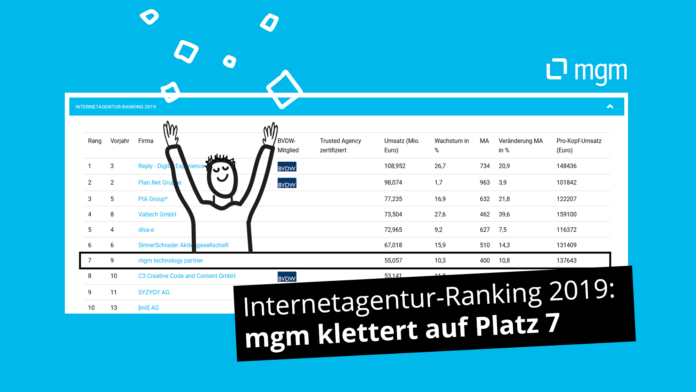 This year, mgm is again one of the ten most successful full-service digital agencies in Germany in terms of revenue. This is shown in the Internet Agency Ranking 2019, which was presented by the Bundesverband Digitale Wirtschaft (BVDW) on May 2nd. With a prorated turnover for agency services of EUR 55.057 million in 2018, mgm technology partners improved from 9th place to 7th place compared to the previous year. Furthermore mgm ranks 3rd in the sub-ranking “Platforms, E-Commerce and Services”.

The year 2018 not only provided positive figures for mgm, but also for the entire industry: According to the BVDW, the 173 companies represented in the ranking grew by an average of 12.4 percent. In total, the agencies were able to turn over 1.66 billion euros. “The continued positive growth proves that digital agencies are needed by companies, also in more and more industries,” explained Anke Herbener, Chairwoman of BVDW’s expert group for full-service digital agencies. “This year we also asked the agencies for their opinions on various trends. The result was that new personnel are currently being hired, especially for the area of digital transformation.”