In their dealings with classic and agile project management methods companies frequently ask the wrong questions. Choosing a suitable approach depends on the framework conditions that affect organizations and projects and not on the theoretical prerogative over interpreting concepts such as waterfall or agile. Companies should therefore try to understand why they should adopt certain approaches and what certain techniques are targeted at. Agile methods are especially suitable for complex environments that require high levels of dynamism and flexibility. A classic project approach is suitable for complicated environments that are characterized by maximum predictability and thereby make a high degree of planning security possible. Hybrid models that combine classic and agile methods are, in contrast, not very promising.

“Waterfall or agile?” is the question that has been driving the executive floors of German firms to despair for some time. That is why an enormous number of pseudo-scientific articles and methods to help with decision-making are to be found on the Internet. Mainly in the classic project management scene a battle for the prerogative over project management methodology has long been smoldering. In an arduous balancing act well-nigh panic-stricken endeavors are undertaken to protect one’s own project management knowhow acquired over many years and to enrich and update it by means of modern agile practices. Yet this fragmentary combination of different approaches and lack of basic knowledge lead to widespread frustration with the lack of effectiveness of agile methods.

There have been numerous attempts to merge classic project management methods and agile approaches into hybrid models. PRINCE2, for example, is claimed to combine outstandingly well with agile methods. This is said to be because the agile approach is focused on the operational level whereas PRINCE2’s strengths are at the management and executive level of projects. A certain combination is thus able to ensure both very good manageability and increased flexibility of projects. This approach is, however, a dangerous reduction of the agile concept that eliminates potential to take effect at the project management and executive levels.

A number of training providers and method developers are also trying to adopt this hybrid model approach. “The combination of both advantages” or “The best of both worlds” are frequently read promises of salvation that pursue the objective of eliminating alleged weaknesses of agile frameworks like Scrum. The so-called Ultimate Scrum is a case in point.

The Project Management Institute (PMI) has resolved this balancing act significantly better, offering PMI-ACP certification as an addition to the classic PMI that enjoys widespread acceptance in the agile community too. It teaches general agile principles, thereby generating fundamental understanding for the choice of the right approach in different project situations.

Sadly, many classically trained project managers fail to make this transition. That is why there have lately been many blog articles, lectures and the like seeking to discredit agile methods or to portray them as a “minor addition” to perfect existing project management. The only point on which they agree is in hoping that agility will prove to be a passing hype with days that are numbered.

Discussions about the interpretation prerogative over individual concepts and rearguard actions of waterfall advocates seldom lead to guiding maxims.

This superficial knowledge naturally finds its way into companies. As a consequence there are discussions about the “one right way” and the “one right method” in projects and the company in general. Comments in these discussions frequently include statements such as “Waterfall has always worked so far; it just needs to be applied correctly” or “You can’t do everything in agile”. And, to crown it all, “Do whatever you like at the working level as long as the project triangle of time, budget and quality is observed.” Interesting discussions, but a total waste of time!

Discussions about the interpretation prerogative over individual concepts and rearguard actions of waterfall advocates at the management level seldom lead to guiding maxims. As a consequence German managers wallow in never-ending and not very helpful discussions about the correct application of theoretical project management frameworks.

Viewed at a slight distance this course of events is similar to any departure from previously predominant technologies, methods or articles of faith. Described on several occasions, it is evidently nevertheless constantly repeated, always along the same lines.

Ask not What but Why!

What is noteworthy about these in-company discussions in which application models are compared with each other is, first, the frequent lack of cogent arguments as to why one method should be used rather than another in the given instance and, second, the absence of experts from the agile sector who could and would be able to provide them.

A good example of this is the frequent reduction of the agile approach to Scrum. The resulting concentration on specific, assigned roles and artifacts deprives agility of the opportunity to present a holistic effect and establish a collaborative, customer-centric mindset at all levels of the company.

The issue that the management really ought to tackle is the framework conditions and influence factors that affect the organization and projects. By means of of simple questions and tools such as Welshman Dave Snowden’s Cynefin Framework you can find out whether you are in a recurring, repeatable, and predictable situation or in a complex environment that is subject to high dynamics and requires great flexibility. This very helpful framework has existed since 1999 yet to this day is still put to practical use far too infrequently.

Discussions should always aim to understand why certain courses of action should be taken and what certain techniques aim to achieve.

Around for even longer yet despite budding popularity still restricted to a niche existence, the so-called VUCA was developed back in 1990. VUCA stands for volatility, uncertainty, complexity, and ambiguity. These four aspects describe the state that the Cynefin Framework calls “complex.” Based on VUCA, organizations are recommended to position themselves so that they become an evolutionary, learning organization that is able adapt its decision-making routes, planning, and problem solving etc. to changing circumstances very fast.

These two thought models are but two examples out of many that help companies to understand the motivations for using agility and, if required, to introduce them in their own organization. So discussions should always aim to understand why certain courses of action should be taken and what certain techniques aim to achieve, thereby concentrating on the Why and not on the What or the How.

The Agile Manifesto and Agile Principles

If, as a manager, you look intensively at your company’s situation on framework conditions, organization and projects you will very likely arrive at similar conclusions and ideas to those of the 17 managers from the software development sector who in 2001 wrote the Agile Manifesto. Basically, the Manifesto acknowledges the approaches of classic models but in view of the complexity of the framework conditions recommends developing and promoting a change of mindset in organizations and projects. It is implemented with the aid of 12 simple principles, such as collaboration of experts and a focus on continuous improvement, and generally advises an iterative, incremental approach.

As soon as companies start to apply these principles in a targeted manner they become more capable of action, more effective and more responsive as an organization because these practices are the right response to complex environments in which a classic approach is not enough or runs a high risk of failure. The Manifesto is not a project management framework but a holistic approach for organizations. So the frequently undertaken direct comparison with classic Waterfall or V models is here inappropriate and does both approaches an injustice.

When Might a Project Outcome be Better by Means of a “Waterfall”?

It goes without saying that environments also exist that are not complex but complicated and are therefore optimally suitable for a classic project approach. Here too the basic principles and practices of agility can help because they can also bring about in these project situations the urgently needed and helpful focus on transparency, multitasking, and collaboration.

A great many people see situations ad hoc as being complicated and predictable – and after brief consideration arrive at the opposite conclusion.

That is to say that if you are planning series manufacture of your product it is a complicated process but not a complex one. In a situation of this kind you can be sure of maximum predictability and planning security and can also keep within your time and budget framework. Changes are not easy to implement and are therefore not welcome. These are the framework conditions in which the waterfall method is truly effective and they alone are the framework conditions in which you should heed an argument based on the Holy Grail of the waterfall method – the project triangle!

But seriously, when did you last have a project of that kind? Is your business model not subject to any kind of dynamic?

A great many people see situations ad hoc as being complicated and predictable – and after brief consideration arrive at the opposite conclusion. Hybrid solutions, by the way, promise a solution combination for situations that are at the same time complex and complicated, such as complex at the operational level and complicated at the strategic level. Paradoxically.

Is Agility Suitable for Projects but not for Strategy?

Question: What is the point of approaching projects that do not correspond to the series production case described above in an iterative, incremental manner while remaining static at the higher management levels?
There is, of course, no point – and it doesn’t work in practice. Once you as a company start to introduce agility at the operational level – a seemingly simpler entry level compared with other levels – agility has an effect at the functional and strategic level too. That means both the interface level and cross-sectional functions like controlling, portfolio management, product management, HR, and the strategic decision level.

An isolated introduction of agility, such as in a few “lighthouse projects,” will always have a holistic effect and should be seen and implemented accordingly by the management. The in-depth effect of agility only unfolds if it is scaled accordingly within the company. Isolated agile islands may be a good start but they are not, in the long term, a solution to be recommended.

Get On with It

Many methods and management practices that are currently being discussed and argued about have nothing to do with either waterfall or agility. They simply make sense and are universally valid. So any kind of assigning them to one camp or the other is a waste of time.

So don’t jaw about it, get on with it!

At the same time deciding between a sequential, repeatable execution of steps on the one hand and an iterative, incremental approach with a consistent customer orientation on the other is something that you should base on sound reasons and not on superficial knowledge and untenable promises and myths.

Are you asking the right questions about agility in your company?

How much say do representatives of classic methods have in your company? Do they have a genuine interest in change toward agility?

Where do you currently get an impartial reflection on your corporate situation and the corresponding agile expertise on how to categorize it?

Don’t be deceived by the temptation to go hybrid. Your overriding objective is either predictability or flexibility – and never both at the same time for the same aspect.

And the most important point: don’t jaw about it, get on with it! 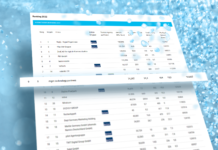