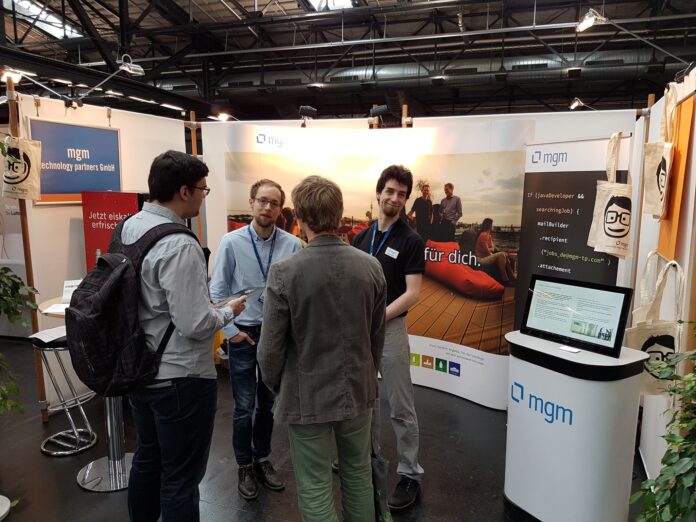 mgm is still looking for new colleagues. For this reason, we will be presenting ourselves at four different recruiting events in autumn in order to give interested job-seekers an insight into the company and an opportunity for a personal conversation.

mgm will be taking part in the inova job fair on the campus of the Technical University in Ilmenau, Thuringia, on October 24th. At stand C05, a member of the recruiting team as well as a colleague from the Nuremberg-based mgm office will be on hand to answer questions from visitors and, in particular, to inform them about the professional opportunities available at mgm technology partners, a software solutions company.

As in previous years, mgm will also be a guest at the HOKO – Hochschulkontaktmesse on November 8th. As part of the event, which will take place in the R-Building of the Munich University of Applied Sciences, the recruiting team and representatives of the Munich office will be providing information about the mgm technology partners division and the management consultancy mgm consulting partners.

One day later, mgm will also introduce itself to the participants of the jobshuttle “Hack & Jump” in Munich. In the premises of the Lebensversicherung von 1871 at Maximiliansplatz 5, we present our company to four small groups of selected students and graduates who want to learn more about the digital economy of the Bavarian capital at four different locations. The recruiting team and a colleague from Munich inform the newcomers travelling through Munich by shuttle bus about the career prospects and everyday working life at mgm.

On November 15, mgm will be organizing the networking event evenING at the Hamburg University of Technology. From 6:30 p. m. on, interested people can come into contact with two colleagues of the Hamburg subsidiary and a representative of the web application security firm mgm security partners in Room A 0.13 in Building A. Initially the colleagues will introduce mgm in a short lecture. Afterwards, visitors are given the opportunity to ask individual questions at a get-together with buffet.

Would you like to know more about your career prospects at mgm? Here you will find current job vacancies as well as detailed information about the mgm locations and the application process.